The Federal Home Loan Bank of Chicago (FHLBank Chicago) is pleased to announce the results of its 2021 director elections. Members elected two independent directors as well as one director from Illinois. One director from Wisconsin ran unopposed. Each director will serve a four-year term beginning January 1, 2022. 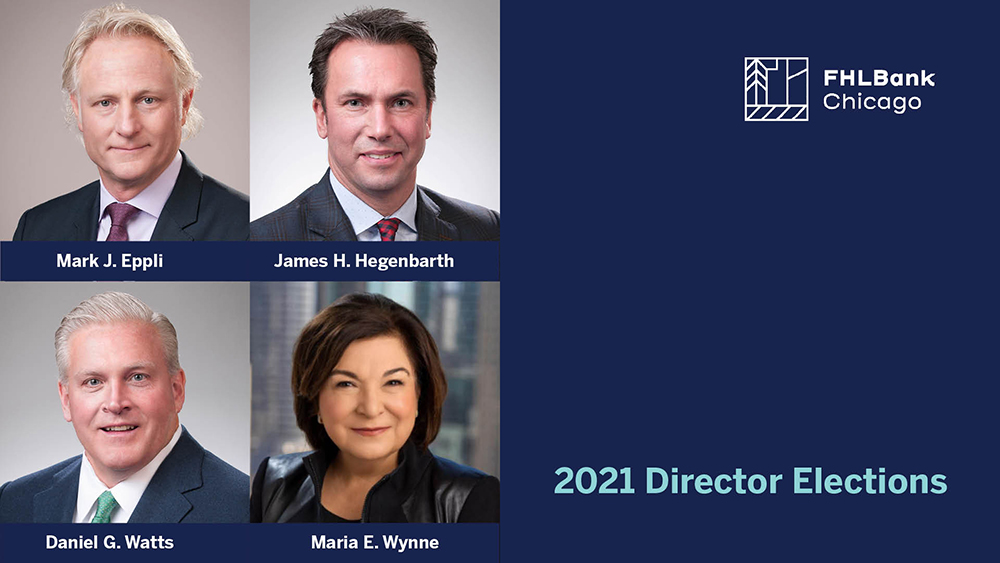 Illinois members re-elected Daniel G. Watts. Mr. Watts is a Director and the President of Forest Park National Bank and Trust Company, which he joined in January 2010. He has been an executive banking professional for over 25 years. He began his career at The American National Bank and Trust Company of Chicago, after which he became an Executive Officer and Director at Cosmopolitan Bank and Trust, Pullman Bank and Trust and Park National Bank (all subsidiaries of the former FBOP Corporation). Mr. Watts currently serves as a board member of Community Investment Corporation (CIC) and Chicago Neighborhood Initiatives (CNI). Mr. Watts is the past Board Chairman of the Illinois Bankers Association and past President of The Bankers Club of Chicago. Mr. Watts earned an undergraduate degree in Economics from Northwestern University, a law degree from Loyola University of Chicago School of Law, and an MBA from the University Of Chicago Booth School Of Business.

James H. Hegenbarth ran unopposed and was declared re-elected as a Wisconsin member director. Mr. Hegenbarth has served as President/CEO of The Park Bank in Madison, Wisconsin since 1999 and a member of its Board of Directors since 1997. He has been in the banking industry since 1985 and served in roles with increasing responsibilities, including consumer loan officer, credit analyst, credit manager, Associate Vice President of Business Banking, Vice President of Business Banking, and Senior Vice President of Lending. Mr. Hegenbarth previously worked at First Bank, N.A. (now U.S. Bank). He is a former Wisconsin Bankers Association (WBA) Board member and a current member of the Government Relations Committee. Mr. Hegenbarth is a Board member of the American Family Children’s Hospital at UW Madison, a trustee and Chairman of the Business and Finance Committee at Edgewood High School and the Chairman of the Ronald McDonald House Madison Capital Campaign. He is also a new member of the American Bankers Association (ABA) FHLB Committee. Mr. Hegenbarth is a graduate of the Graduate School of Banking, University of Wisconsin-Madison, and earned his undergraduate degree in Economics from the University of Wisconsin-Madison.

Maria E. Wynne is Chief Executive Officer of Leadership Greater Chicago (LGC), the region’s premiere civic leadership development organization. Since 2014, Ms. Wynne has led the transformation of LGC, representing the organization at the highest levels of business, government, and social services. She distinguished herself as an innovator and transformational leader at Microsoft and Xerox. She later served as Chief Executive Officer for the Girl Scouts of Greater Chicago and Northwest Indiana from 2008 to 2013. Ms. Wynne is a member of the Commercial Club of Chicago, the Economic Club of Chicago, The Chicago Network, and The Chicago Club. She serves as Board President for the Goodman Theatre, Treasurer for P33, founded to work collaboratively with Chicago communities to make Chicago an inclusive and top Tier 1 Tech City in the United States. She also serves as a Trustee of North Central College, she is an Advisory Board Member of Chicago Innovation and co-chairs the Advisory Council for the Civic Consulting Alliance. Ms. Wynne earned her Bachelor of Arts degree at North Central College and a Master of Business Administration from Northern Illinois University. She has continued her executive education at Northwestern University’s Kellogg School of Management, the Harvard Business School, and the Center for Creative Leadership.

Mark J. Eppli currently serves as the Director of the James A. Graaskamp Center for Real Estate in the Wisconsin School of Business at the University of Wisconsin–Madison. Dr. Eppli has three decades of academic and administrative leadership experience, including a three-year term as Interim Keyes Dean of Business Administration at Marquette University, where he also served as Bell Chair in Real Estate from 2002-2018. Prior to joining Marquette University, he was Professor of Finance in the School of Business and Public Management at The George Washington University, where he directed the MBA program in Real Estate and Urban Development. Dr. Eppli is widely published in commercial real estate finance, development, and valuation. He serves as board member/advisory board member of a number of financial service, real estate development, and not-for-profit organizations.
Dr. Eppli earned his PhD, MS, and BBA from the University of Wisconsin–Madison.

View the FHLBank Chicago Board of Directors