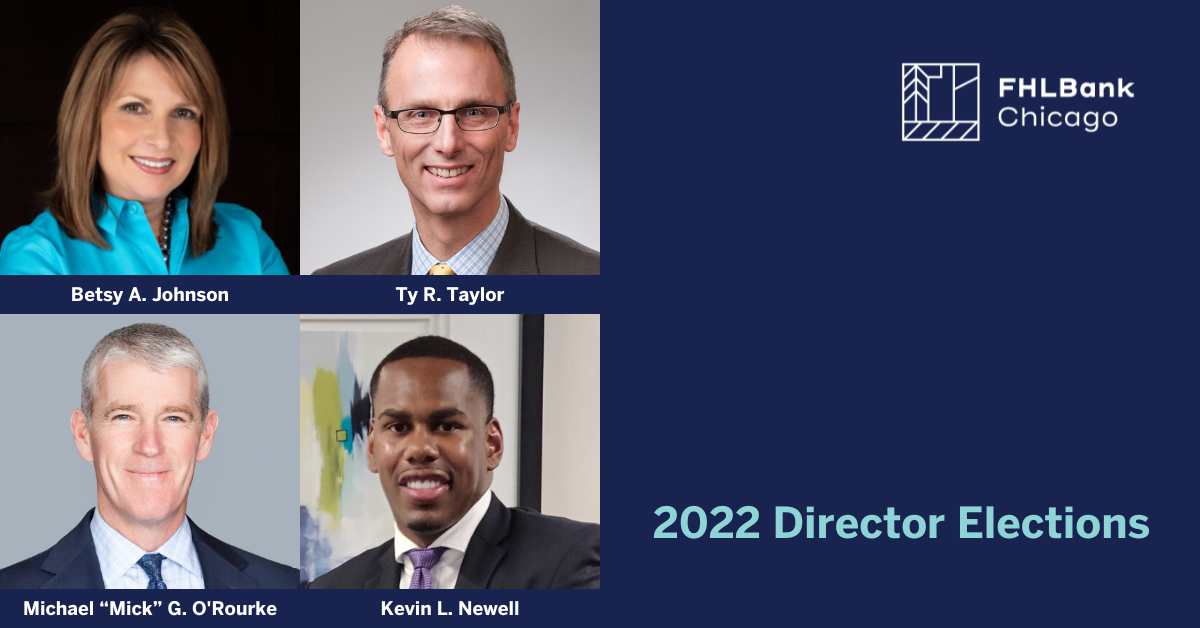 The Federal Home Loan Bank of Chicago (FHLBank Chicago) today announced the results of its 2022 Director Election. Members elected two directors from Illinois, one director from Wisconsin, and one public interest independent director who ran unopposed. Each director will serve a four-year term beginning January 1, 2023.

Betsy A. Johnson is the current President and CEO of Solutions Bank, formerly known as Forreston State Bank. The bank currently employs 68 bankers, $440 million in assets with seven locations in four counties of northern Illinois. Ms. Johnson and management acquired and merged two banks in the last two years. Since 2010, Ms. Johnson has been a director on the boards of the bank and holding company. Outside of banking, she has been a zone chair for the Lions Club and serves as the treasurer for her local Lions Club. She has served on the Forrestville Valley School Foundation as a member and treasurer and continues to be involved in the Foundation’s fundraising committee for the last 20 years. She has also served as church council president, pastor search committee, and building committee. Ms. Johnson is a 2003 graduate of the Graduate School of Banking-Madison (GSB-Madison). She has been a strong advocate of the school and has served since 2017 as the current Chair of the Banker Advisory Board, GSB-Madison. Through involvement in the Illinois Bankers Association (IBA), Ms. Johnson has served and chaired numerous committees. She joined the Board of Directors in 2017, the Executive Committee in 2019, and is the current Chair for the IBA. Ms. Johnson also serves on the Federal Deposit Insurance Corporation Community Banker Advisory Committee since 2021 along with 17 other community bankers from the U.S.

Michael “Mick” G. O'Rourke currently serves as President and CEO of Signature Bank and has over 30 years banking experience. He previously served as Associated Bank Executive Vice President, until he left to organize Signature Bank. He was previously employed by LaSalle Bank N.A. and American National Bank. Mr. O’Rourke is currently the Chairman of the Board of St. Patrick High School and Treasurer of the Western Golf Association/Evans Scholar Foundation. He is a member of the Community Bank Council for the American Bankers Association. He also serves as a Director of St. Angela School, the American Ireland Fund, and the Chicagoland Chamber of Commerce. He served as Director of the Illinois Banker Association from 2009-2015 and served as Director of Navy Pier from 2010-2020. Also, he previously was a Director of Schawk, Inc. (SGK) and Lancer Insurance. Mr. O'Rourke has a bachelor's degree from Marquette University and a master's degree from Loyola University in Chicago.

Wisconsin members re-elected Ty R. Taylor. Mr. Taylor has been President and CEO of Waukesha State Bank since 2004 and has been with the bank since 1991. Prior to becoming President and CEO of Waukesha State Bank, he oversaw the bank's commercial and mortgage lending services, among other responsibilities. From 1990 to 1991, Mr. Taylor was employed at M&I Marshall & Ilsley Bank. Mr. Taylor has volunteered extensively with various local non-profit organizations. Mr. Taylor has a B.A. in Economics from Wheaton College, Wheaton, IL, and is a graduate of the Graduate School of Banking at the University of Wisconsin-Madison. Ty R. Taylor has been a Board member of the Federal Home Loan Bank of Chicago since 2019 and has served on the Public Policy, Operations and Technology, and Risk Management Committees.

Kevin L. Newell is the founder of the Royal Capital Group and has served as CEO since 2010. Royal Capital is a real estate development firm focused on the creation of economic development and housing in the urban core. The company produces hundreds of new affordable housing units in nationwide while providing total wrap around services in the interest of the community. The organization has created family housing, senior housing, and supportive housing with services. As the CEO of the organization, Mr. Newell has led the company’s efforts on business development, strategy, and its investment profile. As the leader of the organization, he serves as an advocate and urban planner aligned with the aim to provide quality, safe, affordable housing that is in the interest of the community. Mr. Newell also serves on the Great Milwaukee Foundation Impact Investment Committee, the Guest House of Milwaukee, MLK Economic Development Corporation. Mr. Newell continues to be an active member of the Wisconsin Preservation Fund since 2017. He has a BBA and MBA graduate of the University of Wisconsin-Whitewater with an emphasis in Finance and Management, and an ACRE Alum at Marquette University. Mr. Newell has served on the Federal Home Loan Bank of Chicago Community Advisory Council since 2019.

View the FHLBank Chicago Board of Directors.